Does Your Team Do Scrum?

When talking to developers I meet, they almost always tell me their teams “do agile” often followed by “Scrum”. After some further conversation about the way they work, I often find they don’t have a product owner, never do retrospectives, have sprints of varying length or have some other deviation of Scrum rules.

So, now we have the situation where loads of teams honestly think they’re doing Scrum, but do not seem to be familiar with nor practice the core rules and terminology. I’m not alone with this observation, see for instance this article in App Developer magazine.

Apparently, this is nothing new. Some ten years ago, Bas Vodde introduced a simple test to quickly assess the level of Scrum and agile adoption of his the ten-or-so agile teams at Nokia-Siemens by looking at adoption of Scrum- and agile practices. This test became known as the “Nokia Test” and is sometimes called the “Scrum, But … Test” This test was adapted by Jeff Sutherland and Dan Greening for use in Jeff’s Scrum courses.

As an agile citizen, I can assess a team’s behavior and compare it to current Scrum best practices, so that I can consider changes that might increase productivity.

I have created a slightly modified version of the original Nokia Test. You can copy the Google form to your own Google Drive, to adapt it to your team and context or use it as-is.

Of course, you can create your own test using the pdf-slides of ScrumInc’s original Nokia Test.

How to use the test

The test consists of 10 sections of about 5 yes/no questions. It will take a participant about 10 minutes to complete.

You can run this test in several ways. Here are some suggestions:

My preferred way of running the test. Print out the pdf version of the questionnaire and hand it out to your team members. Take about ten minutes to fill out the test individually.

Then, as a team score the individual questionnaires using the score sheet.

Prepare a flip chart to aggregate team score. Together, fill out the team chart. Review the results.

Ask all team members to fill out the electronic version of your Google Form. Analyze the results and present the results to the Scrum teams.

Electronically, let me prepare the results for you

Ask team members to fill out Serra’s online version of the test, please agree on a team name before starting. If you indicate you would like feedback of the results, I’ll analyze your team’s answers and get back to you. Please allow me a couple of days to process the results. If you’re in a hurry, give me a call and I’ll see what I can do.

It might seem tempting to use the test as a way to measure the “agile maturity” of your teams. So you’d run the tests a couple of times per year to measure progression of your teams. If you do this, you’re very likely to get teams that score great on the Nokia Test.

But is that what you’re after? 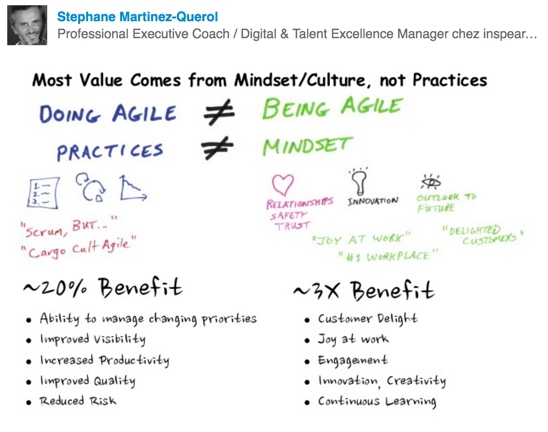